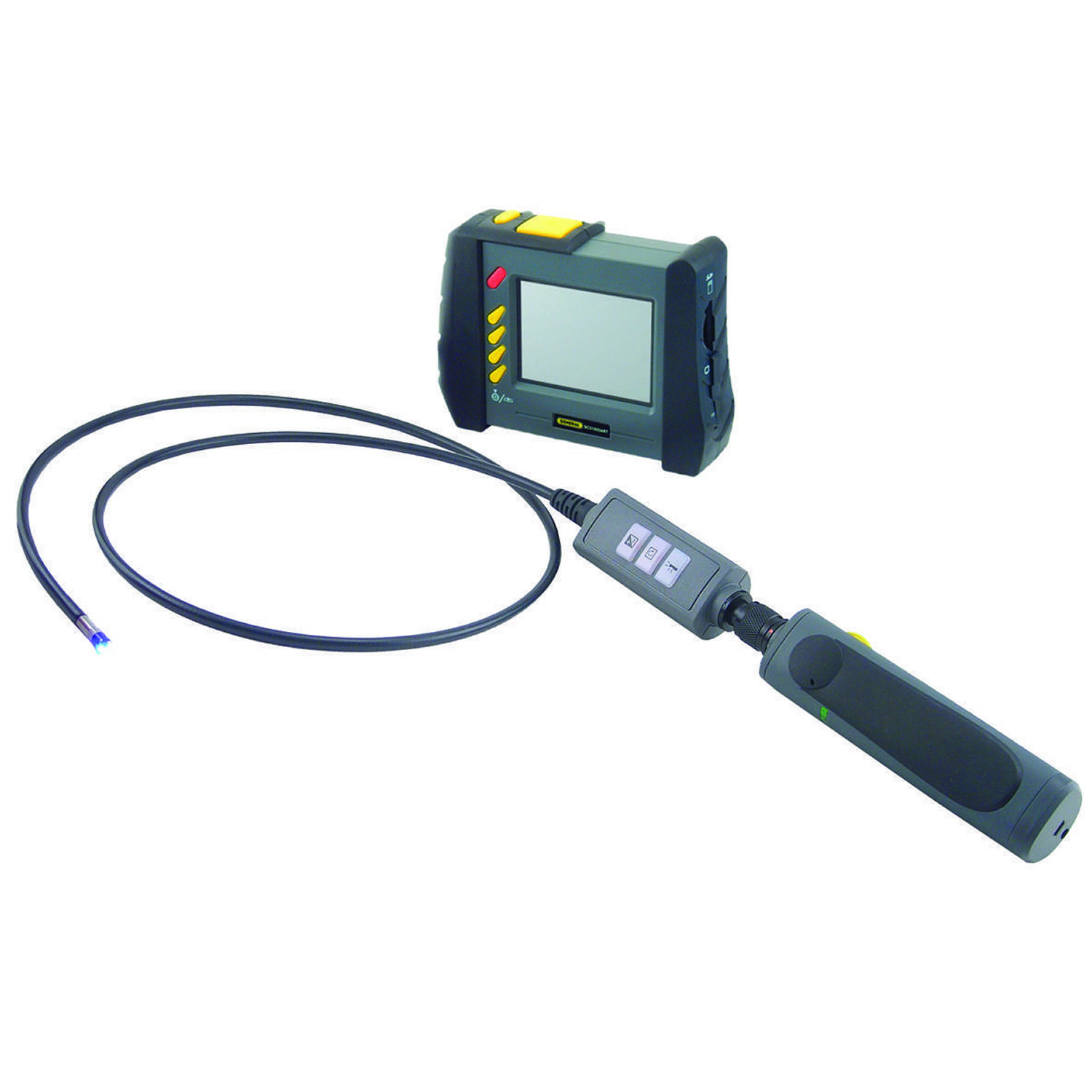 The General Tools DCS1800HP Wireless Recording Video Borescope System with High-Performance Probe has three main components: the DCS1800 Handheld Wireless Recording Video Borescope Console, the P16181HP VGA Resolution Probe, and the DCS1800-RT Wireless Probe Handle/Controller (that connects the console and probe). The P16181HP is 1 m (39") long and has a diameter of 5.5 mm (0.22"). In addition to a VGA resolution camera, the probe has three buttons on its controller that enable users to brighten, rotate and remove reflections from video and images to improve their clarity and readability.

A thumbwheel on the right side of the DCS1800-TR allows users to adjust the brightness of the LEDs illuminating the camera at the end of the probe. Separately, the ability to detach the monitor from the probe also increases application flexibility by, for example, enabling two-handed operation.

Preview mode
Video framed by the camera's field of view is displayed in real time on the console's LCD. The console automatically enters this mode when powered on. A front-panel button allows users to double the size of a target (a zoom level of 2X). The same button allows users to "mirror" video, making it possible to read serial numbers seen and "reversed" by an attached probe with a mirrored viewing tip. In Preview mode, real-time video also can be exported through an included video cable to any NTSC- or PAL-format TV monitor with RCA input jacks. Operating in Preview mode, the DCS1800 console also allows users to record inspection video clips and photos at VGA (640 x 480 pixel) resolution on an included SD memory card by pressing icon-labeled buttons on the console's front panel. The remaining front-panel buttons enable access to Playback and Menu modes.

Playback mode
Users can browse the SD card for saved video and picture files and view the media on the console's LCD or a larger TV monitor. Video clips and photos 3 also can be viewed on a PC by removing the SD card and plugging it into the computer directly or through a card reader. Because videos are saved as ".avi" files and photos as ".png" files, applications found on most PCs (Microsoft Windows Media Player and Microsoft Office Picture Manager) can open the files. The 4GB SD memory card included in the DCS1800HP case can store at least 4 hours of video, recorded at 15 Mbytes/minute, in addition to hundreds of photos.

Menu mode
Use familiar scrolling motions and responses to dialog boxes to navigate a main menu with six submenus. When selected, submenu items execute "housekeeping" functions such as deleting files, setting the date and time, enabling or disabling date and time stamps, choosing any of 28 languages for display indications, selecting a Video out format and adjusting the triggering time of the console's Auto Power Off (APO) function.